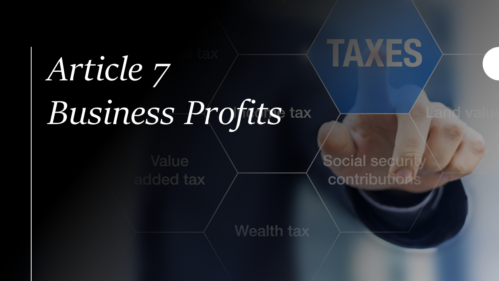 Article 7(1) of the OECD similar to the UN Models with the exception that the OECD Model, does not incorporate the “Force of Attraction” rule. To illustrate, Force of Attraction Rule, if a foreign company sells certain goods through a showroom in Source State, even direct sales to the customer from overseas entity would also be attributed to the PE and would be treated as profits arising from the PE.

•        Article 7(1) do not apply to business profits dealt with by Article 8 (Shipping profits), 10 (Dividends), 11 (Interest) or 12 (royalties). Such profits, can be taxed under the respective Article in the Source State, even in the absence of a PE in the Source State.

•        Further, income derived from furnishing of independent personnel services,  falls under Article 7 of the OECD Model due to deletion of Article 14 in the OECD Model (which is present in UN Model).

Article 7(1) of the UN Model provides the right to the State of Source to tax profits of an enterprise of State of Residence if, both the following conditions are fulfilled :

– Enterprise carries on business in Source ; and

Even in such a case, only so much profits as are attributable to the following can be taxed :
– the PE;

– sales of same or similar goods or merchandise as those sold through that PE in Source State – Force of Attraction; or

–        other business activities carried on in Source Staof the same or similar kind as those effected through that PE.

METHODOLOGY OF ATTRIBUTION OF PROFITS 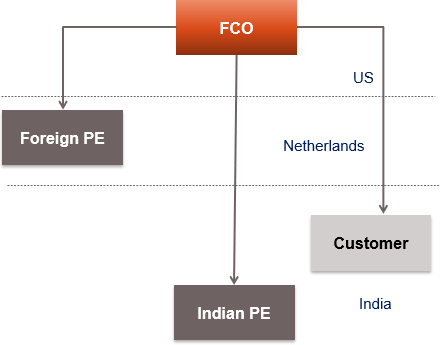 WHAT IS TAXABLE UNDER ARTICLE 7 BUSINESS PROFITS

TURNKEY CONTRACTS – ACTIVITIES IN & OUTSIDE INDIA

HOW TO ASCERTAIN PROFITS OF A PE ?

JUDICIAL PRECEDENTS ON ATTRIBUTION OF PROFITS

JUDICIAL PRECEDENTS ON ATTRIBUTION OF PROFITS

What is allowed as a deduction ?
Expenses incurred for the purposes of the business of PE/ reasonable allocation of  specified expenses

Which expenses can be reasonably allocated ?
Executive and general administrative expenses, R&D and interest

Where should the expenses be incurred ?
In the State in which the permanent establishment is situated or elsewhere

Are domestic laws restrictions applicable ?
Deduction shall be in accordance with and subject to local laws limitation

CAN THE FOLLOWING BE CLAIMED AS A DEDUCTION ?

Can HO claim a mark up on expenses?
No, actual expenses are allowable

If the HO lends own funds and charges interest should that be allowed ?
May not be allowed as a deduction

Is it necessary that allocated expenses should lead to direct revenue generation ?
Not necessary for claiming a deduction

Can the HO cross charge cost of development of Intangible ?
Yes, provided used by the PE and no royalty charged later

What basis can general expenses be allocated ?
Turnover/ Gross Profit / Net proceed ratio to that of the Enterprise

However, no such deduction shall be allowed in respect of amounts, if any, paid (otherwise than towards reimbursement of actual expenses) by the permanent establishment to the head office of the enterprise or any of its other offices, by way of royalties, fees or other similar payments in return for the use of patents, know-how or other rights, or by way of commission or other charges for specific services performed or for management, or, except in the case of a banking enterprises, by way of interest on moneys lent to the permanent establishment.

For the purposes of the Convention,
the term “business profits”
means
income derived from any trade or business
including income from the furnishing of services other than included services as defined in Article 12 (Royalties and Fees for Included Services) and
including income from the rental of tangible personal property other than property described in paragraph 3(b) of Article 12 (Royalties and Fees for Included Services)

If AO is of opinion,
that actual income accruing or arising to any non-resident person whether directly or indirectly cannot be definitely ascertained,
the amount of such income for the purposes of assessment to income-tax may be calculated :
• At such % of turnover, as is considered reasonable by AO;
• Apportioning total profits of business of NR in the Ratio of Indian receipts to total receipts of the business
• such other manner as the AO deems suitable.