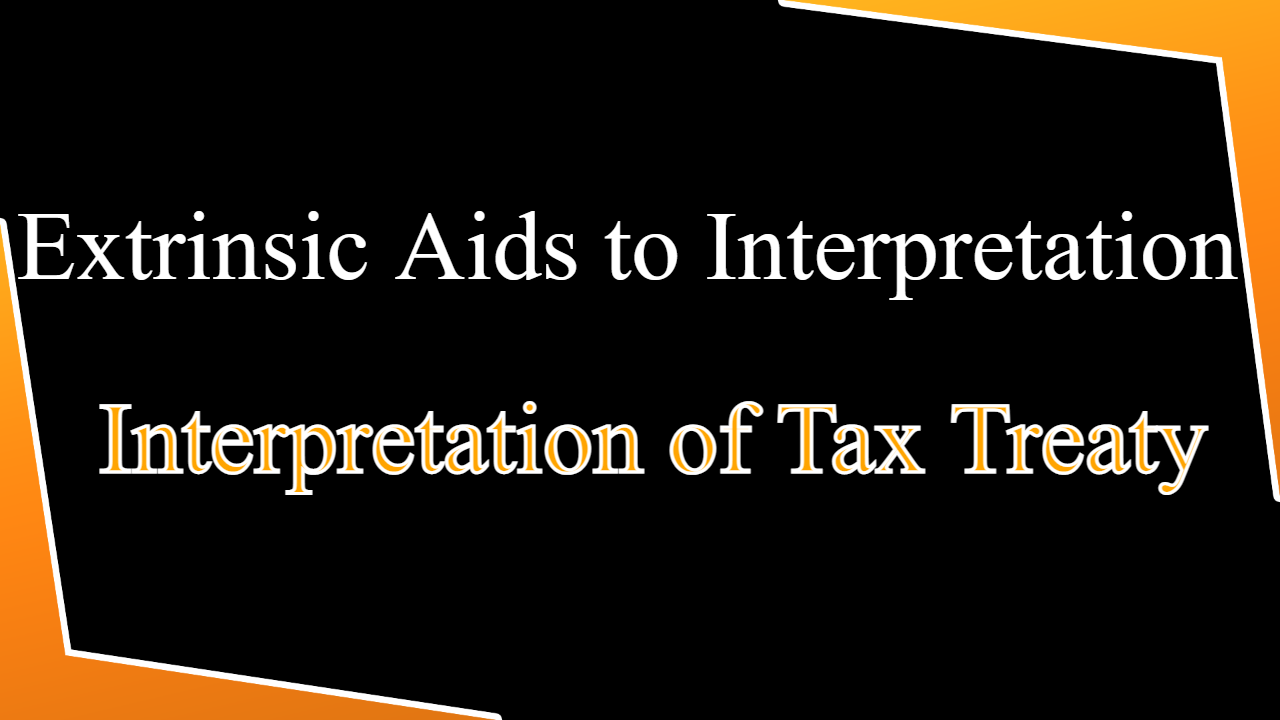 EXTRINSIC AIDS TO INTERPRETATION OF A TAX TREATY

There are several extrinsic material used in interpretation of tax treaties including the following : –

Where the language used in two tax treaties is same, one can rely on the interpretation/explanations provided in the treaty which has elaborated explanations.

The views of the Indian Judiciary are, however, not consistent in this respect.

For example India US Treaty contains certain provisions relating to taxation of fee for included (Technical) Services, wherein such services are taxable only when they “make available” technical or Consultancy Services. There are various examples given in the India US treaty, which provide when the services would be considered as “making available” . Several other treaties, which India has entered into also contains a similar clause in relation to fee for Technical Services. While interpreting, whether, the explanation provided in the India USA Treaty should be applied to such other treaties, the courts have taken different view in favour and against using such  interpretation in the India USA Treaty.

In case of CIT v. Vishakhapatnam Port Trust (1983) 144 ITR 146 (AP), the High Court obtained “useful material” through international articles and relied on them to arrive at the decision.

Cahiers published by INTERNATIONAL FISCAL ASSOCIATION, Netherlands, were relied upon in case of Azadi Bachao Andolan’s (supra) case by the Supreme Court.

EXTRINSIC AIDS TO INTERPRETATION OF A TAX TREATY – PROTOCOL

Protocol is a supplement to the treaty, but is an integral part of the Treaty. Protocol is incorporated in a treaty to clarify certain matters, or make some amendments to the existing provision in the Treaty.

It has the same binding force as the main clauses of the Treaty.

While it is not necessary that every Treaty should have a protocol , one must refer to Protocol in the Treaty (if any) , before arriving at any final conclusion in respect of any provision contained in a tax treaty.

Protocol to the India-US tax treaty provides many examples on meaning of the term “make available”. 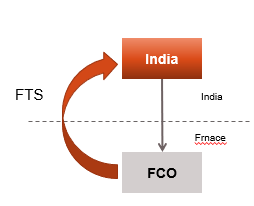 Most Favored Nation (MFN) clause is generally found in Protocols and Exchange of Notes to Double Tax Conventions.

While generally, the MFN Clause is automatically applicable on signing of a subsequent treaty, some DTAAs may require special notification to give effect of the subsequent treaty to the preceding Treaty.

The MFN clause in the protocol on DTA with FRANCE reads as follows:

If we apply the above provision to the MFN clause, we can notice the following : –

In the following cases, the applicability of the MFN clause has been discussed and upheld by the Indian judiciary : –

Management fees received by Sandvik AB from its group companies in India is not exigible to tax in India as “fees for technical services”, since the “make available” condition was not satisfied. The Tribunal referred to the protocol attached to the India-Sweden DTAA and invoked the MFN clause to import the “make available” condition from India Portugese Treaty into the India-Sweden tax treaty.

EXTRINSIC AIDS TO INTERPRETATION OF A TAX TREATY – PREAMBLE

Preamble is an introductory and expressionary statement in a document that explains the document’s purpose and underlying philosophy.  In the context of tax Treaties, Preamble is the opening statement  which  explains the reasons,  why the Two States entered into the Treaty. Preamble to a tax treaty could guide in interpretation of a tax treaty.

In  Azadi Bachao Andolan, the Apex Court observed that

‘the preamble to the Indo-Mauritius Double Tax Avoidance Convention (DTAC) recites that it is for the ‘encouragement of mutual trade and investment’ and this aspect of the matter cannot be lost sight of while interpreting the treaty’.

Lets look at the preamble to India-UK tax treaty, which is given hereunder :-

“Whereas the annexed Convention between the Government of the Republic of India and the Government of the United Kingdom of Great Britain and Northern Ireland for the avoidance of double taxation and the prevention of fiscal evasion with respect to taxes on income and capital gains has entered into force on 26th October, 1993 on the notification by both the Contracting States to each other of the completion of the procedures required by their respective laws, as required by Article 30 of the said Convention;

Now, therefore, in exercise of the powers conferred by section 90 of the Income-tax Act, 1961 (43 of 1961), the Central Government hereby directs that all the provisions of the said Convention shall be given effect to in the Union of India.”

MAP helps to interpret any ambiguous term/provision in the tax Treaty, through bilateral negotiations between Treaty partners. Article 25(3) of the OECD MC permits competent authorities to “resolve by mutual agreement any difficulties or doubts arising as to the interpretation or application of the Convention – [ Detailed discussion on MAP is being made in later part of this chapter and   Chapter 1 of Transfer Pricing]

Commentaries on OECD Model or the U.N. Model, offer clarifications on the Articles (clauses) in the Treaty and can be referred for interpretation and application of various provision contained in a DTAA. OECD Commentary is revised from time to time. UN Commentary is  by and large based on OECD commentary. The clause by clause comparison of the two Commentaries is made in Chapter 6 of this book titled ‘Overview of Tax Treaties’

OECD commentary is directly applicable to OECD countries , who adopt text of OECD Model Convention. Where a non OECD  country adopts the text of OECD Model Convention the without any change, the commentary carry immense persuasive value.  While India is not a member of OECD and is only an observer country, it participates in discussion on revision of Model Commentary. However at many places, India has expressed its reservations, indicating disagreement   or right to follow different tax treatment or interpretation, compared to what is given in the OECD Model Commentary.

Courts in India have considered interpretation given by the Commentaries.  In the case of CIT V. Vishakhapatnam Port Trust 144 ITR 146 (A.P.), the High Court referred extensively to the OECD Commentary and decisions of Foreign Courts in giving the decision.

In the CIT V. VISHAKHAPATNAM PORT TRUST’S CASE, the Indian Court had quoted foreign courts decision in interpretation of treaty provision. The relevant extract of the judgement is as under : –

“In view of the standard OECD Models which are being used in various countries, a new area of genuine ‘international tax law’ is now in the process of developing. Any person interpreting a tax treaty must now consider decisions and rulings worldwide relating to similar treaties. The maintenance of uniformity in the interpretation of a rule after its international adoption is just as important as the initial removal of divergences. Therefore, the judgments rendered by courts in other countries or rulings given by other tax authorities would be relevant.”

In addition to the above, the foreign court cases have extensively quoted in interpretation of treaty provisions in following cases : –

APPROACHES IN INTERPRETATION OF TERMS USED IN A TREATY

However, Article 3(2) of the OECD Model Convention dealing with meaning of Terms not defined in Treaty, provides that while the   ambulatory approach can be applied, it is subject to contextual interpretation.

This Article provides that if a term is not defined in the treaty, it shall be interpreted in accordance with the provisions of the tax laws of the Contracting State, that may be applying the Convention, unless the context requires interpreting the term ‘otherwise’.

The application of this approach can be found in India-US treaty, which provides that any term not defined in the treaty, shall be interpreted according to the common meaning agreed by the Competent Authorities pursuant to the provisions of Article 27 (Mutual Agreement Procedure). If there is no such meaning agreed, only then, the meaning would be assigned from the domestic tax law provided the context does not require otherwise. The relevant extract is reproduced as under : –

“As regards the application of the Convention by a Contracting State any term not defined therein shall, unless the context otherwise requires or the competent authorities agree to a common meaning pursuant to the provisions of Article 27 (Mutual Agreement Procedure), have the meaning which it has under the laws of that State concerning the taxes to which the Convention applies”.

Objectives for signing a tax treaty play a significant role in its interpretation as they determine the context in which a particular treaty is signed.

Principal objectives of the Tax Treaties as per the OECD Model Convention are as follows :

The main objective of DTAA as per UN Model is to ensure sharing of revenue between States through negotiations and compromise. The other objectives of the DTAA are as under : –

Section 90(1) provides that the Government of India may enter into DTAA with any foreign country or specified territory outside India for following objectives : –