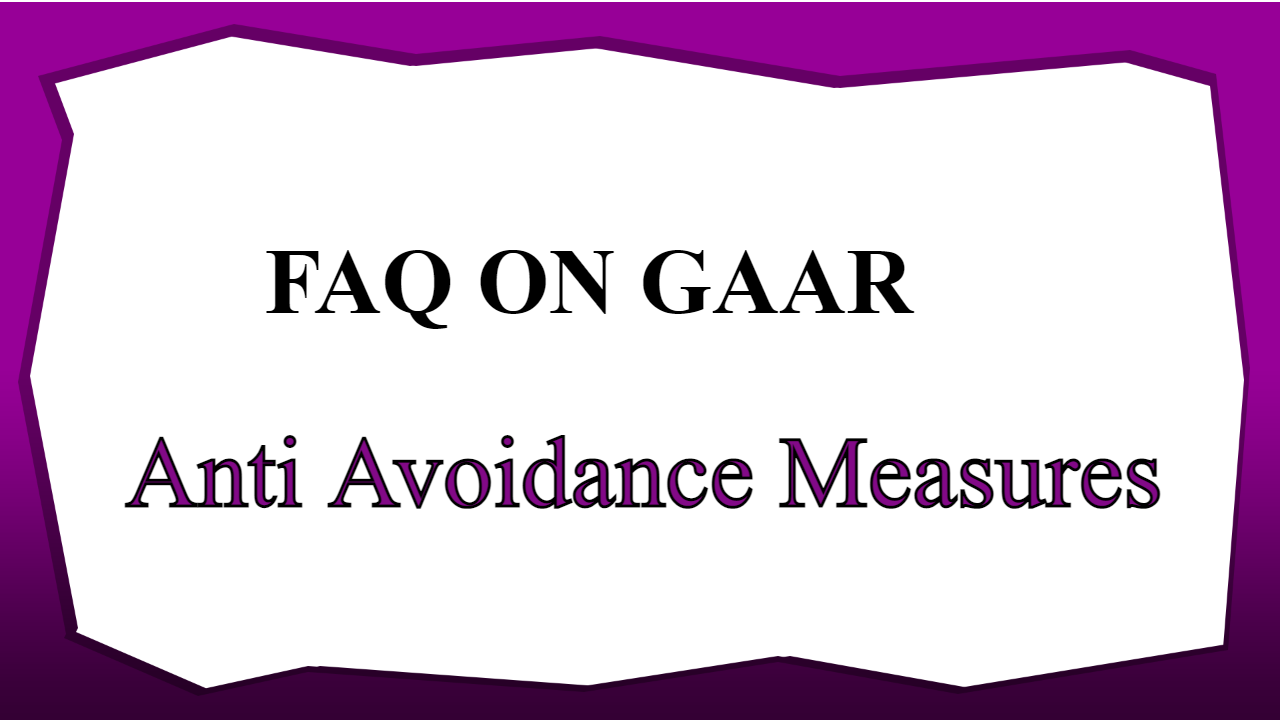 Will GAAR be invoked if SAAR applies?

It is internationally accepted that specific anti avoidance provisions may not address all situations of abuse and there is need for general anti-abuse provisions in the domestic legislation. The provisions of GAAR and SAAR can coexist and are applicable, as may be necessary, in the facts and circumstances of the case.

Will GAAR be applied to deny treaty eligibility in a case where there is compliance with LOB test of the treaty ?

Adoption of anti-abuse rules in tax treaties may not be sufficient to address all tax avoidance strategies and the same are required to be tackled through domestic anti-avoidance rules. If a case of avoidance is sufficiently addressed by LOB in the treaty, there shall not be an occasion to invoke GAAR.

method of implementing a transaction.

For GAAR application, the issue, as may be arising regarding the choice of entity, location etc., has to be resolved on the basis of the main purpose and other conditions provided under section 96 of the Act. GAAR shall not be invoked merely on the ground that the entity is located in a tax efficient jurisdiction. If the jurisdiction of FPI is finalized based on non-tax commercial considerations and the main purpose of the arrangement is not to obtain tax benefit, GAAR will not apply.

Will GAAR provisions apply to (i) any securities issued by way of bonus issuances so long as the original securities are acquired prior to 01 April, 2017 (ii) shares issued post 31 March, 2017, on conversion of Compulsorily Convertible Debentures, Compulsorily Convertible Preference Shares (CCPS), Foreign Currency Convertible Bonds (FCCBs), Global Depository Receipts (GDRs), acquired prior to 01 April, 2017; (iii) shares which are issued consequent to split up or consolidation of such grandfathered shareholding ?

Grandfathering under Rule 10U(1)(d) will be available to investments made before 1st April 2017 in respect of instruments compulsorily convertible from one form to another, at terms finalized at the time of issue of such instruments. Shares brought into existence by way of split or consolidation of holdings, or by bonus issuances in respect of shares acquired prior to 1st April 2017 in the hands of the same investor would also be eligible for grandfathering under Rule 10U(1)(d) of the Income Tax Rules.

The expression “investments” can cover investment in all forms of instrument – whether in an Indian Company or in a foreign company, so long as the disposal thereof may give rise to income chargeable to tax. Whether grandfathering would extend to all forms of investments including lease contracts (say, air craft leases) and loan arrangements, etc. ?

Grandfathering is available in respect of income from transfer of investments made before 1st April, 2017. As per Accounting Standards, ‘investments’ are assets held by an enterprise for earning income by way of dividends, interest, rentals and  for capital appreciation. Lease contracts    and loan arrangements are, by themselves, not ‘investments’ and hence grandfathering is not available.

Will GAAR apply if arrangement is held as permissible by Authority for Advance Ruling?

No. The AAR ruling is binding on the PCIT / CIT and the Income Tax

Authorities subordinate to him in respect of the applicant.

Will GAAR be invoked if arrangement is sanctioned by an authority such as the Court, National Company

Law Tribunal or is in accordance with judicial precedents etc.?

Where the Court has explicitly and adequately considered the tax implication

while sanctioning an arrangement, GAAR will not apply to such arrangement .

Will a Fund claiming tax treaty benefits in one year and opting to be governed by the provisions of the Act in another year attract GAAR provisions? An example would be where a Fund claims treaty benefits in respect of gains from derivatives in one year and in another year sets-off losses from derivatives transactions against gains from shares under the Act.

GAAR provisions are applicable to impermissible avoidance arrangements as defined under section 96. In so far as the admissibility of claim under treaty or domestic law in different years is concerned, it is not a matter to be decided through GAAR provisions.

How will it be ensured that GAAR will be invoked in rare cases to deal with highly aggressive and artificially pre-ordained schemes and based on cogent evidence and not on the basis of interpretation difference ?

The proposal to declare an arrangement as an impermissible avoidance arrangement under GAAR will be vetted first by the Principal Commissioner / Commissioner and at the second stage by an Approving Panel, headed by judge of a High Court. Thus, adequate safeguards are in place to ensure that GAAR is invoked only in deserving cases.

Can GAAR lead to assessment of notional income or disallowance of real expenditure ? Will GAAR provisions expand the scope of charging provisions or scope of taxable base and/or disallow the expenditure which is actually incurred and which otherwise is admissible having regard to diverse provisions of the Act?

A definite timeline may be provided such as 5 to 10 years of existence of the arrangement where GAAR provisions will not apply in terms of the provisions in this regard in section 97(4) of the IT Act.

Period of time for which an arrangement exists is only a relevant factor and not a sufficient factor under section 97(4) to determine whether an arrangement lacks commercial substance.

It may be ensured that in practice, the consequences of a transaction being treated as an ‘impermissible avoidance arrangement’ are determined in a uniform, fair and rational basis. Compensating adjustments under section 98 of the Act should be done in a consistent and fair manner. It should be clarified that if a particular consequence is applied in the hands of one of the participants, there would be corresponding adjustment in the hands of another participant.

Adequate procedural safeguards are in place to ensure that GAAR is invoked in a uniform, fair and rational manner. In the event of a particular consequence being applied in the hands of one of the participants as a result of GAAR, corresponding adjustment in the hands of another participant will not be made. GAAR is an anti-avoidance provision with deterrent consequences and corresponding tax adjustments across different taxpayers could militate against deterrence.

Tax benefit of INR 3 crores as defined in section 102(10) may be calculated in respect of each arrangement and each taxpayer and for each relevant assessment year separately. For evaluating the main purpose to be obtaining of tax benefit, the review should extend to tax consequences across territories. The tax impact of INR 3 crores should be considered after taking into account impact to all the parties to the arrangement i.e. on a net basis and not on a gross basis (i.e. impact in the hands of one or few parties selectively).

If the PCIT/Approving Panel has held the arrangement to be permissible in one year and facts and circumstances remain the same, as per the principle of consistency,GAAR will not be invoked for that arrangement in a subsequent year

Levy of penalty depends on facts and circumstances of the case, and is not automatic. No blanket exemption for a period of five years from penalty provisions is available under law. The assessee, may at his option, apply for benefit u/s 273A if he satisfies conditions prescribed therein.