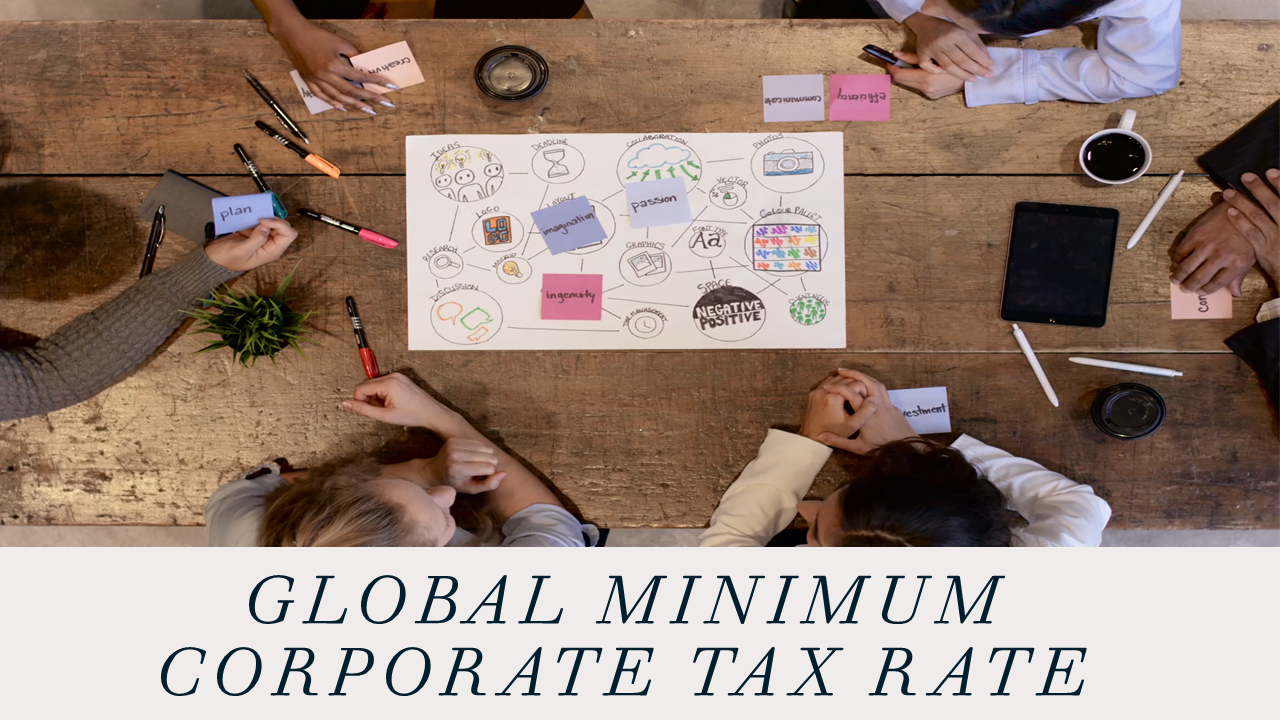 What is Global Minimum Tax?

In order to attract international business and investments, tax rates  are kept at very low level in many countries. These low tax rates result  in outflow of funds and business from economies that have a proper tax structure in place,  to countries with a lower rate of tax or Nil rate of tax. This resulted in creating a severe disadvantage to nations that were charging appropriate taxes on income .
Buy Now @Rs 876

In order to deal with this issue, the concept of Global Minimum Tax was introduced by the Organization for Economic Cooperation and Development (hereinafter referred to as the “OECD”) Inclusive Framework on Base Erosion and Profit Sharing (hereinafter referred to as “BEPS”) in December 2021. In a gist, this tax is aimed at taxing Multi-National Enterprises which escape tax liability or pay tax at a lower rate than the proposed tax rate i.e. 15%. The key idea is, that if   a company earns profit  , then such  profits should  be liable to be taxed at a minimum rate. If the country where profits are generated do not tax them, the Ultimate parent entity shall have the obligation to pay tax on such profits in its jurisdiction. This would prevent enterprises  from shifting profit from one country to another, i.e. parking them in the country where there is a lower rate of tax.

Let’s understand this with an example.

A US based company wants to incorporate an Indian Company. However, if it does so directly then in case it wishes to sell the Indian company a few years later, capital gains earned from such transaction shall be liable to be taxed in the USA. But, if it establishes a company in Mauritius, (where let’s assume, that no tax is charged on capital gains and there is a treaty in place between India and Mauritius that capital gains will not be taxed), the US based company won’t have to pay any tax on sale of the company. In this manner a company successfully shifts its profits from a tax paying jurisdiction, or an economic activity jurisdiction to a jurisdiction with lower or nil rate of tax.  With the introduction of GMT, the US based company i.e. the Ultimate Parent Entity will have to pay  tax on sale of shares of Indian company in US.

Developments on GMT on the International Front

Although this concept has been gaining ground for the past few years, recently it has gained momentum, with countries taking renewed interest in concretizing this into a law. This is so because most of them are victims of tax evasions due to modern use of conducting business through technological means,    bringing down tax revenues for economies around the world.

Bird’s eye view of the journey so far:

With the advent of technology, many companies   changed business structure from    brick and mortar ,  to digital business models. Thoroughly unprepared for such a drastic shift, the current tax laws were not adept enough to evolve with the global change.

Although still in its early stages, it has provided for certain MNCs who are above the prescribed revenue threshold,  to  pay the minimum rate of tax that will be decided upon i.e. all MNCs  would not be covered under these Global Minimum Tax Rules, but only  certain MNC that meet the defined criterion.

Objectives and Scope of Application of Global Minimum Tax

The key objective of the Global Minimum Tax Rules is to introduce a number of interlocking rules, which seek to ensure at least a minimum rate of taxation to be levied on Multi National Enterprises on their profits  while avoiding the following :

The tax will be levied only at the rate, which would be a difference of the GMT – Tax actually suffered. For instance, if an MNC earns income that is subject to tax at a rate  of 10%,   the GMT Rules will kick in and the MNC will have to pay additional tax at the rate of 5%, not at 15%.

In cases of genuine loss or other such similar circumstances, if a transaction is not generating any economic profit, then it would not be liable to  GMT.

No two countries have a similar tax structure, other than the ones that operate on 0% tax regime. Therefore the GMT Rules  would  accommodate not only the diverse tax structures followed by different countries,  but also  take into account, the various business models   within their scope.

Information should be provided so as to ensure transparency and make sure it doesn’t distort competition amongst businesses.

Compliance with the GMT Rules is intended, so that it does   not act as a burden on the taxpayer by increasing costs and compliance.

Scope of Application of GMT Rules

The entities, which will be covered under the application of the GMT Rules shall include the following:

The following are the key rules relating to the application of Global Minimum Tax:

Let’s take a detailed look at the Rules discussed above. 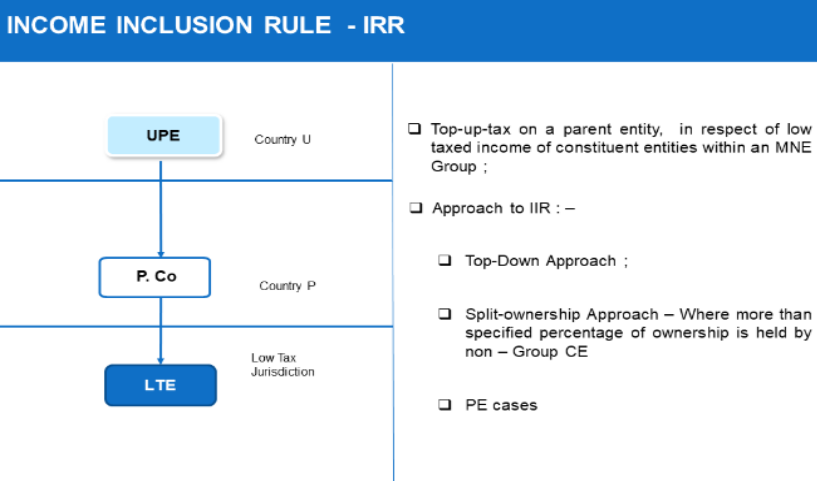 To understand Income Inclusion Rule better, let’s take an example. There is an Ultimate Parent Entity (UPE), a 100% subsidiary of the UPE and a Low-Taxed Entity (LTE) in three different jurisdictions. The LTE operates in a jurisdiction where the rate of tax charged on its operations is 0%. The UPE in this case, on behalf of the LTE shall have to pay a top-up tax of 15%.

If the rate of tax at the LTE’s jurisdiction is 5%, then, since the tax rate is still below the proposed GMT (i.e.,15%), the UPE shall be required to pay tax at the rate of [15% – the tax rate at the LTE i.e., 5%] 10%. However, one must take note that it must be the Ultimate Parent Entity bearing this burden, not the Parent Company of the Low-Taxed Entity or any other company. This means that the Rule is applicable on the entity highest in the hierarchy in the business model.

There are various approaches to IIR:

The Top-Down approach is applicable on the parent closest to the top of the ownership chain. If the UPE is 100% owned by “Another company”, then that “Another company”  shall be termed as the Ultimate Parent Entity, not the former one.

The UPE and the jurisdiction in which it is incorporated, for the purposes of this Rule, has to fulfil the following conditions: 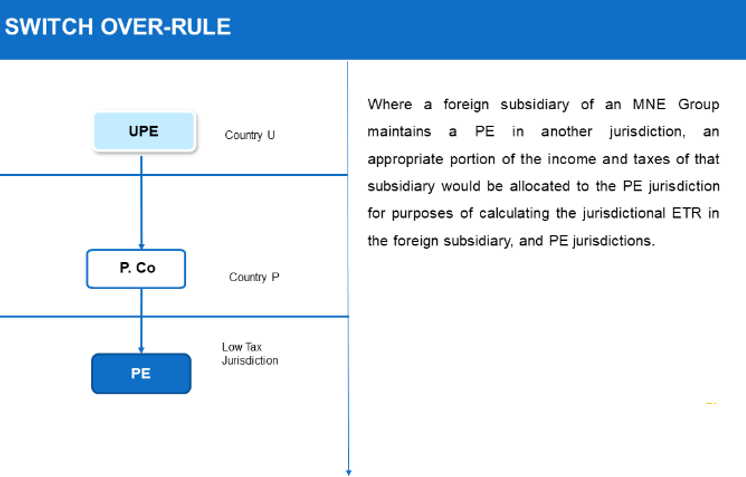 To understand the concept of Switch Over Rule better, let’s look at an example. A company which a UPE is incorporated in a country . It has a 100%   subsidiary P Co. in another country. P Co. has a permanent establishment (PE) in a third country. Let’s assume that the profit earned by the PE is 100 and the standalone profit earned by P Co. is 100 as well. The rate of tax in the PE’s jurisdiction is 0% and in the P Co. jurisdiction is 15%.

To answer this question, two points have to be considered:

There can be situations where the profits of the PE are not taxable in the jurisdiction of the Parent Company.

Under the GMT Rules, top-up tax has to be collected either through the IIR or, if IIR is not applicable,   in the jurisdiction of the UPE,  UTPR becomes applicable. UTPR is applicable only in cases where a Constituent Entity (CE) is located in a jurisdiction which has implemented the UTPR. The CE will then be liable to adjust in respect of any top-up tax that is allocated to it from a low-tax Constituent Entity of the same group.

Let’s take a look at this concept with an example. The LTE has earned an income of 500, wherein it received 250 from P Co. and 250 from S Co. It is to be noted that both the companies are located in two separate jurisdictions. Let’s assume that both the jurisdictions provide for UTPR to be applicable within their respective territories. Now, the rate of tax in the LTE’s jurisdiction is 0%, making the top-up tax to be 15% (since GMT rate is 15%). Therefore, both the companies i.e. P Co. and S Co. are liable to pay the tax liability calculated on the total amount i.e. 500 at the rate of 15%, equally. This would mean that both P Co. and S Co. shall pay [500 * 15%= 75 i.e. 75/2= 37.5] each.

This rule also addresses base erosion through deductible intra-group payments.

A small scale exemption has been provided to MNE’s under the UTPR on the basis of Tangible Assets and Number of Jurisdictions. MNEs that have overseas tangible assets worth EUR 50 million or less and are operating in 5 jurisdictions or less shall be given a grace period of 5 years.

IIR is applicable where the Ultimate Parent Entity whose jurisdiction has implemented the IIR and it controls the LTE (or LTCE- Low Tax Constituent Entity). However, if these conditions are not met, i.e. IIR is not applicable in the jurisdiction of the UPE, then UTPR becomes applicable.

Q1. What is the Global Minimum Corporate tax rate ?

Q2 . What are the Safe Harbor Rules under Global Minimum Corporate tax rate ?