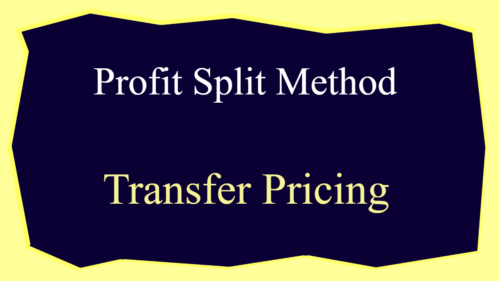 The application of Arm’s Length Principle while implementing the provisions of Transfer Pricing, to arrive at the price of a transaction between unrelated parties is essential. However different situations call for application of different methods of the ALP principle, depending on the mitigating factors in every transaction. One such method is the Profit Split Method. Let’s take an in- depth look into this concept.

Profit Split Method Transfer Pricing – In case of a transaction between two related Enterprises, both the enterprise maybe earning certain profits or losses. Under the profit split method (PSM) Transfer Pricing, the total operating profit earned by  the parties involved in the transaction is first ascertained. There after it is splitted, amongst the parties, based on the respective contributions.

PSM evaluates, if, the profits or loss, allocated to a particular entity, out of combined operating profit, of controlled transaction, is at arm’s length, considering their individual contribution in the overall profit or loss.

Evaluate the relative contribution made by each AE through their activities, to the earning of such combined net profit.

The combined net profit is then splitted amongst the Associated Enterprises in proportion to their relative contributions.

The profit so apportioned to the tested party, is considered to arrive at an arm’s length price of the international transaction.

The allocation of profit or loss under the PSM must be made in accordance with one of the following allocation methods : –

The combined operating profit or loss from the relevant business activity is allocated between the controlled taxpayers following the two-step process : –

MNC US entered into a contract for manufacturing of Dam on a river, for which its subsidiaries in US, Singapore and India worked together. The total contract price of deal was $100M. Net profit earned by MNC US from the entire deal transactions was $15M, of which the routine contribution is $5M, wherein the relative efforts put in by group companies are 35%, 30% and 35% respectively.

Non routine profit are to be splitted amongst the group companies on the basis of ownership of non-routine intangibles i.e. 20%, 30% and 50%.

Compute the Arm’s length profit of related party in US, Singapore and India in accordance with Profit Split Method ?