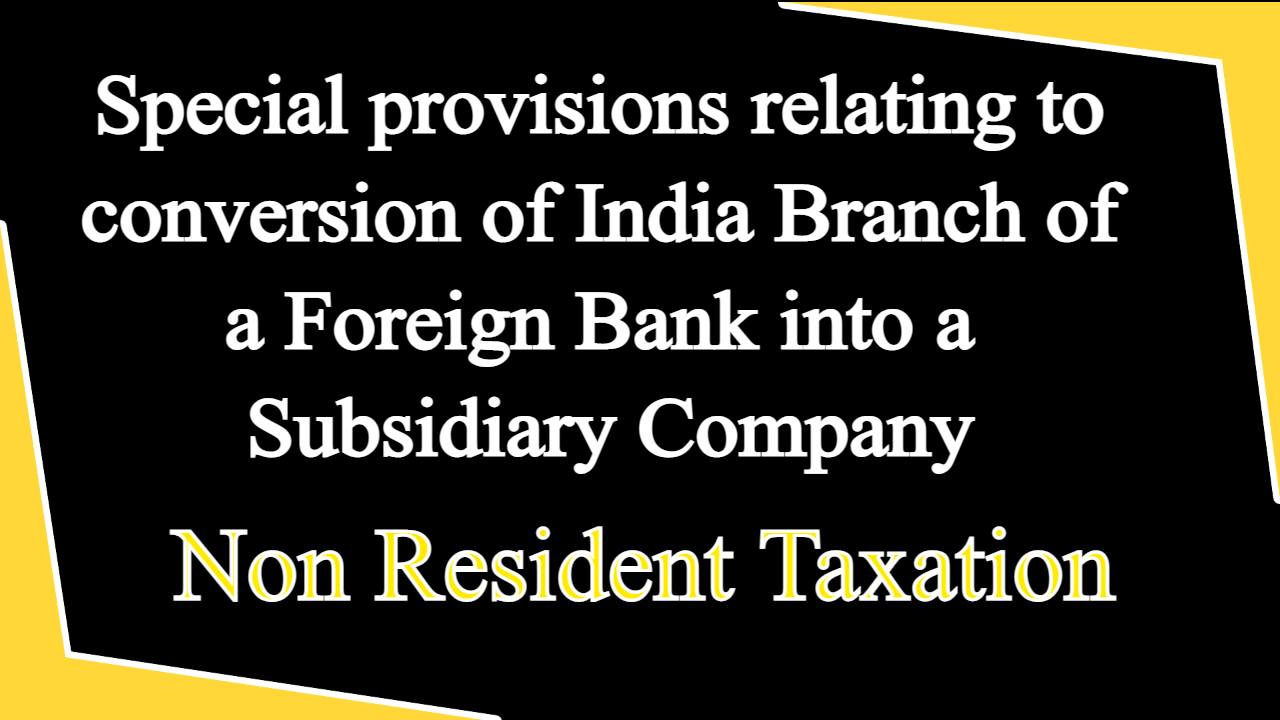 Where the branch of a foreign company, which is engaged in banking business in India is converted into an Indian subsidiary of such foreign company ,any capital gains arising from such conversion would not be chargeable to tax , provided the conditions notified by the Central Govt. are satisfied and such conversion is in accordance with the scheme framed by RBI).

“Date of conversion” shall be the date which the Reserve Bank of India appoint for the vesting of undertaking of the Indian branch in Indian subsidiary company  – Draft Notification on section 115JG, dated 17-11-2017

b) the foreign company or its nominees hold the whole of the share capital of the subsidiary company ;

c) the foreign company does not receive any consideration or benefit, directly or indirectly, in any form or manner, other than by way of allotment of shares in the Indian subsidiary company.

APPLICABILITY OF OTHER PROVISIONS

Provisions relating to computation of income

The provisions relating to computation of income of foreign company , and Indian subsidiary company would apply with such exceptions, modifications and adaptations as are specified in the notification.

Provision relating to set off, carry forward and tax credit

The benefit of set-off of unabsorbed depreciation, set-off and carry forward of losses, tax credit in respect of tax paid on deemed income relating to certain companies available under the Act shall apply with such exceptions, modifications and adaptations as specified in the notification.

Modifications and adaptations to various provisions

Aggregate deduction, in respect of depreciation of various assets allowable to the Indian branch and the Indian subsidiary company –

a)    Shall not exceed in any previous year the deduction calculated at the prescribed rates as if the conversion had not taken place, and

b)    Such deduction shall be apportioned between the Indian branch and the Indian subsidiary company in the ratio of the number of days for which the assets were used by them .

ACCUMULATED LOSS AND UNABSORBED DEPRECIATION OF THE BRANCH

Such loss and depreciation,  shall be deemed to be the loss or allowance or depreciation of the Indian subsidiary company for the purpose of previous year in which conversion was effected .

If the conditions specified in RBI scheme or Central Government notification

In such a case, the AO, is empowered to re-compute the total income of the assessefor the said previous year and make the necessary amendment, irrespective of any other provision in the Income-tax Act, 1961. To carry out such recomputation, the time limit to carry out rectification under section 154would be applicable until a period of 4 year from the end of the previous year in which the failure to comply with such conditions has taken place.