What is Treaty Shopping? 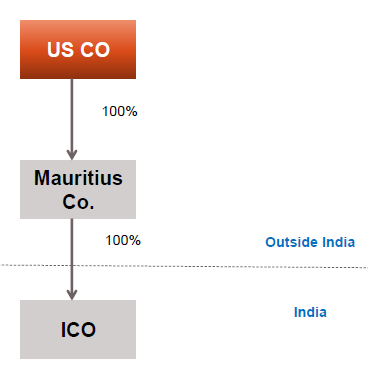 Treaty shopping refers to a “situation where a person who is not entitled to benefits of a tax treaty makes use-in the widest sense of the word of an individual or of a legal person, in order to obtain those treaty benefits that are not available directly.”

Treaty shopping is defined as routing of income arising in Source country, to a person in another country (country of residence), through an intermediary country, to obtain an unintended tax advantage, through interpretation of tax treaties between the three countries.

The word conduit means a channel for conveying water or other fluid. In the context of Treaty shopping, it implies setting up an intermediary company or entity which is used to transfer earnings from Source State to the State of residence in a manner that it reduces overall taxes. 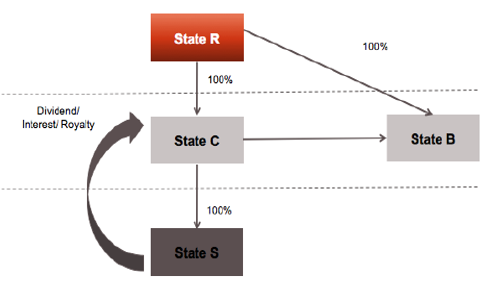 In case of a Stepping stone conduit, a Company which is a residents of State R, establish company resident in State C, where it is fully subject to tax on income derived from Source State (State S). However, the company in State C, pays high interest, royalties, service fees, commissions etc. to a second related foreign company in a fourth state (State B) and controlled by shareholders of the conduit company (State R). These payments are deductible in State C (resulting in no tax in State C), and are  either non taxation or low  rate taxation in State B, due to a preferential regime.

In such cases, Company in State R (Residence State) sets up a low or nil taxed branch in a Treaty Country. The branch receives income from State of Source, that are either not taxed, or taxed at a low rate in the jurisdiction where the branch is situated, due to a favorable Treaty between the State of Source and country of the Branch.

Hybrid entities are those entities that are characterized differently in the two Contracting States. For example, in India a partnership is taxed on its income  and partners are exempt from distributions by partnership, whereas in some  other countries, partnership are considered as transparent entities.

Individuals can also treaty shop,  by transferring tax residence to another treaty country, i.e., ‘emigration’. For example, an individual, who is expecting huge capital gains , and a high tax on such gains in   its country of residence, may become a non-resident in that country, immediately before the transfer of capital asset. IN such a case, if he is a non-resident, such capital gains may not be taxed in his country of residence. Further, if he becomes a resident of a country which does not have any tax on capital gains, the entire gains would not be liable to tax in any country

Main Categories of Anti-Treaty Shopping Measures Currently in Use

b. Specific measures that deny benefits to entities which are not subject to tax in their state of residence.

c. Purpose-based measures that deny certain treaty benefits to entities, set up only for claiming such benefits. Example is no tax refunds are given under Netherlands treaty with the U.K.

d. Comprehensive measures imposed under domestic legislation or treaties, like, Limitation on Benefits.